I did it!  I visited the promised land, the land flowing with milk and honey and it was…too short.  That may be the number one complaint I have with the whole trip, but I think that’s what everyone says after vacation.

I was in Hong Kong for the Asia Society Arts + Museum Summit, a meeting of leaders in the art museum world.  I was really really fortunate to get sponsorship to attend because otherwise the two-day event would have set me back $500 USD! 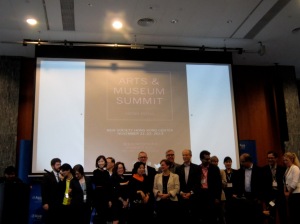 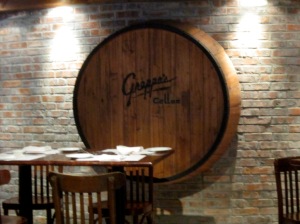 I did my research before arriving in Hong Kong and learned that there was dancing at a place called Grappa’s Cellar on the very night I was to arrive. I checked in to the hotel and then took out the directions to the place and set off walking.  I think I had forgotten how big the rest of the world is because LP is so walkable.  I wasn’t even in the neighborhood with this place.  After what seemed like an hour of walking I started to think it wasn’t going to happen.  I had stopped into several places to ask for directions and had, of course, gotten conflicting information.  It was a nice walk, but I didn’t want to be walking.  I wanted to be dancing.

Finally I entered a coffee shop and asked for directions one last time and the woman drew a picture of the building (which I had already passed).  Remarkably her drawing and the actual building looked quite similar: a rectangle with lots of circles. 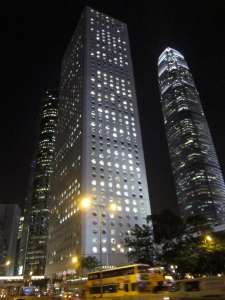 So I entered and rushed to the basement, thinking I was an hour late.  Turns out that the guest I had asked in the hotel what time it was also had the wrong time.  I thought it was 9 when I arrived and that it started at 8, but it started at 8:30.  I ordered a delicious pasta dish and ate, at first, tentatively.  It was my first real post-stomach bug meal.  The atmosphere was great even before the dancing started.  That’s definitely a place I’d go back to.

Oh, but once the dancing started–man, oh, man.  As Fats Waller would say, “That joint was jumpin!” 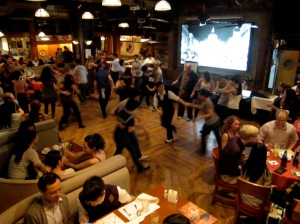 The next day I was to get business cards printed, change hotels, and get lunch with my old friend, Helen, from Qingdao who was studying in HK.  I guess I should back up and say that I had neither a smart phone or a stupid phone with me.  iPod touch but no 3G.  So, yeah, I got really lost.  REALLY lost.  I couldn’t find the business card man I was supposed to pick up my cards from.  Fortunately, a random stranger let me use her phone.  The business card man and I eventually met up in a subway station.  I was excited to have my first set of personal professionally-designed business cards.  That excitement deflated a little when I saw the print job.  The background was supposed to be white but had a silver glittery tint to it and the card stock wasn’t as thick as I was imagining. But, still, it was 200 cards made in 3 hours for $50 USD and they were mine. 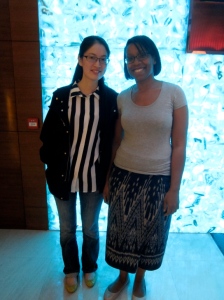 Next to find Helen.  She said the equivalent of, “Lets meet at Starbucks” in Seattle but suggested a local chain.  This time, I had no luck finding someone with a phone and with several branches throughout the neighborhood, it was unlikely I’d find her.  I headed to my second hotel instead cause I could call from there. 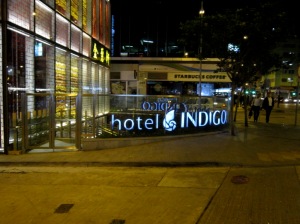 Hotel Indigo Hong Kong Island was amazing.  It felt like a smart home.  I’m sure everything in it you could find in any other hotel, but the way it was all done was really comfortable and chic and…smart.

Back to Helen.  I called from the hotel and she met me in my room where we caught up for about an hour and a half before I had to head to the conference site: the Asia Society Hong Kong Center. 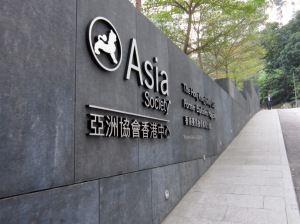 The event was interesting and it was great to network.  It was great to be around thinkers and strategic leaders again.  I guess I won’t bore you with details of the actual summit, but the gala dinner (by invitation only!) had this billionaire’s personal chef provide the food, I saw the exhibit on Southeast Asia in their gallery space, and got a chance to see a great view of the city in good company. I did end up embarrassing myself a little talking with some women from Taiwan at the event.  We were speaking in Chinese and I told them that after Hong Kong I was headed to Bali for a date 约会 rather than a conference 开会.  They did figure out what I meant and we shared a good laugh. 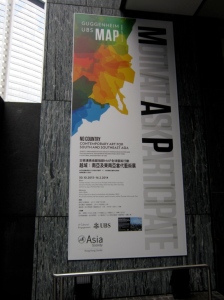 After the last day of the summit, I ventured out on my own again to meet some other friends from Qingdao who were working in Hong Kong at their house for dinner.  I arrived very early, but without incident.  I was proud of this accomplishment as it was dark and getting to their place required multiple transfers on the subway/light rail. I grilled them about what its like to live in Hong Kong and they said all the right things I could possibly hear about a place except: if you want to get married, its hard to meet people here.  Turns out, a lot of single women leave for exactly that reason. Is it unreasonable to put off living in a place because you won’t be able to meet anyone there? So, I put Hong Kong on my “Maybe in 5+ years from now” list. But its definitely a place I could see myself. 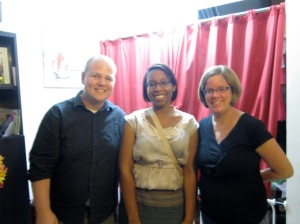 My final morning in town, I met my conference buddy, a financial analyst from Kuwait who was living in HK and just likes the arts, for brunch and we ran into another attendee along the road. The three of us hung out for a while before I headed back to my hotel to check out and catch the train to the airport.

Next stop: 12 hours in Bangkok!