I feel like a spoonful of countryside makes the medicine go down.

Monday’s trip to my co-workers house could not have been better timed. He picked me up on his motorbike around 8:30 and then we went to the market to shop for lunch.  We even bought live fish!  After getting all the groceries we needed we set off on a 25km motorbike ride.

The unobstructed view from the back of a motorbike was incredible.  Once we got outside of town there was nothing but green for long stretches at a time.  The scenery alternated between rice paddies, forests, green hills, and traditional villages with houses on stilts and thatched roofs.  The air was refreshingly fresh which I took advantage of.  I took as  many deep breaths to my lung’s content and wore my face out from smiling each time.  Everything —EVERYTHING— was just so beautiful and peaceful that I felt like each kilometer we drove my aggravation with life at the moment just kind of gradually melted back down into manageable territory.  As we rode my co-worker gave me commentary on everything we were looking at.  He pointed out the many different kinds of trees and told me how much money you could get for them in town.  Apparently, when people are young they plant trees and then use them as sort of social security or a child’s education savings when they are older.  When countryside Lao people stop working, they go, cut down the trees they planted 20 years before and sell them in town to furniture makers. He explained the different ways to grow rice and showed me as we passed examples of the different ways.  Once he even stopped by some people who were in the middle of planting rice and he gave me a longer explanation.  He taught me the names of trees and told me which ones were the best.  But one thing he said that really helped lift me out of my morning misery was “Euai [older sister] Alicia.  At work, you are my boss.  But outside of work, you can think of me as your brother.  You are welcome to go to my house any time, even if I’m not there.”  He also was telling me that the other bosses hadn’t gone to his home before because they were too busy so he was happy I was able to go. 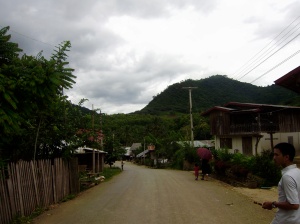 About an hour later, we arrived at his village.  He drove the motorbike right up to the entry of the house. First, we sat for a while upstairs on the floor eating fruit while my coworker explained how traditional houses worked.  There were no windows, everything was just open.  The first floor had no walls, just a slightly-raised flat bench where people could sit and spend time together. It was more like the house was on stilts and people hung out under the house.  The neighbors’ houses were the same so you could chat with neighbors without even leaving your home.

His wife scaled and gutted the fish and I headed back to the kitchen to help prepare lunch.  I cut the onions and tomatoes.  I thought it was a job impossible to mess up, but lo and behold, after asking if it mattered how I cut the onion and receiving a negative response I was told promptly that I was cutting it too small.  Tom Yum soup was the lunch menu for the afternoon which made me really really happy because I love me some Tom Yum soup (nom nom—or rather, slurp slurp).  My coworker went to get firewood and came back and started a fire in this sand-box looking cooking area on the kitchen floor with a short stand for holding pans in it. We sat in front of the fire waiting for the soup to cook and Sai pointed towards the backyard and showed me his chicken and duck.  He explained that he’d like to get pigs if he had more money and space.  He hopes also is in a few years to be able to build a small house in his wife’s village near.

Once the soup was ready we headed back to the front of the house and sat on the ground eating sticky rice with our hands and spooning the soup directly from a large communal bowl.  After I finished eating I was STUFFED and laid on the floor for a short while patting my stomach before we headed out to the waterfalls. 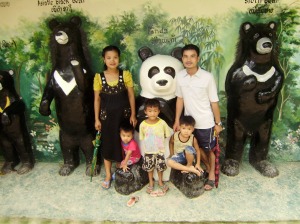 My coworker, his wife, his two kids, his mother-in-law’s sister’s son and I set off down the street to walk about 100 yards to the waterfall entrance.  It was so much fun.  They’re a fun family and my coworker is really good with kids so I enjoyed watching him play with his boys.

The falls were just as beautiful as they looked in the pictures online.  The tourists were just as obnoxious.   We walked around and then after a couple hours walked back.  Along the way we stopped at his mother-in laws shop to sit and the kids played with some toys.

Finally we went back to his house.  I tried to nap for a short time but ended up reading my kindle and listening to grandma talk.

It was such a fun day but the highlight for me was definitely when my coworker said I could think of him as a brother.  After the hard night I had just had before, I needed to hear that.

2 thoughts on “A Spoonful of Countryside”